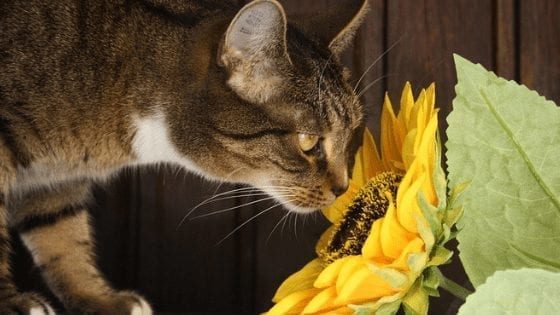 Plants are a beautiful addition to your home. They add greenery and colour, purify the air and can even help you sleep better. Unfortunately, there are many common plants toxic to pets. It’s best to remove these plants if you have pets as they may pose a significant danger to your furry friends.

Most Common Plants Toxic To Pets

These beautiful plants are common house plants, and cut lilies are very popular in a floral arrangement. Unfortunately, many people are unaware that lilies are highly toxic and potentially fatal to cats. Some types are also toxic to dogs.

Although your pet may not directly eat the plant, cats often lick themselves to keep clean, so if they brush past the plant, the pollen can easily catch on their fur.

When ingested, lilies can irritate the mouth leading to drooling, difficulty swallowing and vomiting. It can also cause diarrhoea, lack of appetite, stomach pain, depression, kidney damage, kidney failure and multiple organ failure.

Irritation in the mouth, excessive drooling and nausea.

Usually an outdoor plant, the Dumbcane rarely kills humans or animals, but it is poisonous. The entire plant contains insoluble calcium oxalates and proteolytic enzymes. If a pet chews on the plant, their saliva mixed with the enzymes produce harmful crystals.

Aloe Vera is used by humans for medicinal purposes, but its level of toxicity to cats and dogs is mild to moderate.

Found in tropical and ornamental gardens, all parts, especially the seeds of this plant are highly toxic to dogs. Consumption is often fatal.

This wildflower, although beautiful, contains Colchicine and Colchiceine, the latter being more toxic than harmful. The symptoms of Colchicine resemble those of Arsenic, and no antidote is known. The most poisonous part is the bulb, but the entire plant is dangerous to dogs.

Especially popular around the early months of the year leading up to Easter, the beautiful Amaryllis is poisonous to dogs.

These little pink beauties are ornamental shrubs that are very toxic to dogs. Often animals are poisoned when they ingest the leaves.

This unassuming fern is toxic to both cats and dogs. Its effect is mild to moderate in toxicity.

Considered as a weed in Australia, don’t let its colourful exterior fool you. It is extremely toxic to dogs and cats.

If you have pets, check the plants in and around your home and remove any plants that are toxic to pets. If you’re in the market for new plants, make sure you do your research on pet-friendly plants first. You can ask your local garden centre or your vet if you’re unsure.

If you suspect your fur buddies to having any of the symptoms of plant poisoning, seek medical attention and visit your vet immediately.