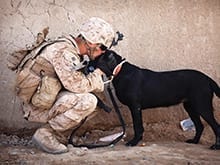 Dogs play an important role in our lives each and every day but every now and again a dog will do something which truly inspires us.

All too often when Dogs are featured in the news it’s for all the wrong reasons. This drove us to seek out some inspirational and heart-warming stories about brave canine companions who have truly shown what it means to be man’s best friend. The ‘Australian Underdogs’ featured here have all changed lives of someone (or in some cases many) through their incredible acts of bravery, in some cases being recognised for their efforts with the Purple Cross Award.

What is the Purple Cross Award?

Only a small number of animals have been formally honoured for their amazing acts of bravery. Few still have received the Purple Cross Award from the RSPCA. The award was founded ‘to recognize the action of animals, particularly if they have risked their life to save a person from injury or death.’ Named after the Purple Cross Society, which was established in World War I as part of the Light Horse Brigade, the award is perhaps the highest honour any animal in Australia can receive. You can see a full list of recipients here.

In 2007, Tank, a Rottweiler cross and his partner in crime and next door neighbour Muck, a Staffy cross, saved little 2 year old Max Hillier from drowning in a dam near Mackay, QLD.

The trio went wandering from the Hillier family home and onto a neighbours’ property 300 meters away. Max’s mother Georgie believed that Max and Tank were happily playing together in the backyard and was unaware of what was about to unfold.

A fellow neighbour later found the trio, muddied and dirty and returned them to Georgie after she had heard her calling out for Max. It was said that when neighbours had found the boy and the dogs, that both dogs were frantically barking. Tank was found guarding Max, whilst Muck was seen pacing between the water’s edge and Max, as if to prevent the toddler running into the dam again.

Police later advised that drag marks at the scene and on Max’s arms and back show that he had been dragged to safety and the two had been barking to draw attention. They also said that had it not been for the pair’s instincts, the boy would not have survived the ordeal.

In November 2007, both Tank and his mate Muck were awarded the Purple Cross Award by the RSPCA, along with a certificate for the family and a very large bone each.

This story in particular, made us realize how truly brave and resilient our furry friends can be. Her story touched us and we are sure you will feel the same way.

Sarbi, the beautiful black Labrador/Newfoundland cross, was trained in explosives detection and was deployed to Afghanistan as part of the Australian Army’s ‘Operation Slipper,’ Australia’s part in the ongoing war in Afghanistan. Sarbi specialised in the detection of IED’s and disappeared in 2008 on her second tour of duty during an ambush in Khaz Oruzgan after a rocket exploded near her, causing her to flee.

After being declared MIA, 14 months later Sarbi was spotted with an Afghani civilian, north-east of Oruzgan and reunited with her handler.

On April 5th 2011, Sarbi was awarded the Purple Cross Award by the RSPCA at the Australian War Memorial, for her incredible strength, bravery and resilience during a battle which cost 9 soldiers their lives.

Then PM Kevin Rudd had this to say about Sarbi’s bravery:

‘Things like that, they may seem quite small, but in fact the symbolism is quite strong and the symbolism of it is us out there, doing a job… we haven’t awarded any Australian Victorian Cross awards for 40 years. Trooper Donaldson stands out there as an Australian hero and now his dog Sarbi is back home in one piece and is a genuinely nice pooch as well.’

“It’s amazing, just incredible to have her back’ said Sarbi’s handler.

Private Sarbi is a true hero and even has her own Facebook Page. Jump online and show your support for this amazing pooch by liking her page.

The intuitive cattle dog named Teka, from Maryborough in QLD was also featured in the news for her bravery.

Her owner Jim Touzeau collapsed from a heart attack in 2007 whilst at work in a glass factory. Teka knowing something was wrong, began jumping with full force on her beloved owner’s chest, trying to wake him up. She then started barking in his face and once he awoke ran outside to attract attention. The doctors that treated Mr. Touzeau are unsure for certain whether or not Teka’s ‘method’ of CPR saved his life, but are certain that had she not have attracted attention, that the man would have died. Mr. Touzeau was told by his doctors that his heart had stopped and was quoted saying that:

‘She must have been thinking I better wake this fella up or I may not get any dinner!’

Teka was awarded the Animal Achievement Award by the RSPCA and also received a very large bone to recognize her bravery.

There you have it, three heart-warming stories and four dogs that have each been recognised for their amazing acts of bravery. So, the next time you look at your dog, take a moment to realise just how important they are to you and you are to them. Its stories like these that make you grateful for our furry companions and just how special they really are. We hope to bring you many more stories of canine ‘superheroes’ in the future.

“Dogs have given us their absolute all. We are the centre of their universe. We are the focus of their love and faith and trust. They serve us in return for scraps. It is without a doubt the best deal man has ever made. ”– Roger Caras

Combine a love for writing and a love for animals and you’ve met our pet blogger, Laura Pyper. Laura is a passionate animal advocate and enjoys exploring the lighter side of life and living with pets.